You looked at it, didn’t you? Well, I don’t blame you. Many have fallen for this simple, yet elaborate trick, including me.

This is “The Circle Game.” 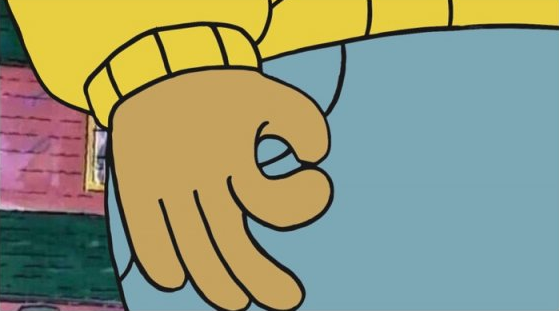 You might have seen fellow students, or even yourself, fall for the trick. Or maybe you have participated in the game yourself. The mechanics behind this trend are straightforward. You begin by creating the O.K. hand gesture, in which a circle is formed with the thumb and forefinger and the three other fingers spiral outward. The goal is to make someone look at the circle by grabbing his/her attention. Common attention grabbers are: “Do you mean this?” and “What’s this down here?” Once the sucker takes the bait, you get to reel 'em in. You are then granted one strike on the poor chump’s arm, utilizing your fists. However, if the hand gesture exceeds the waistline, the attempt is nullified.

Now how did this game gain so much popularity? Well, it first appeared in mainstream media on the show Malcolm in the Middle, where Reese persistently tricks Stevie into looking at a circular gesture he formed with his hand during a family dinner. After falling for Reese’s trick, Reese atrociously punches Stevie on his arm. Despite the episode airing in 2000, it’s exceedingly likely that The Circle Game might have first started in the late 1990s, only to make its way to the mainstream decades later.

Just like the early primates, this game has also evolved. Teens have added their twist to this game in accordance with their liking. A common variation is the five-finger formation in which all five fingers touch tips. What later ensues is not a punch on the arm, but a smack on the back of the hand.

The Circle Game is a very short game. There are no winners and no losers; no beginning and no end, yet, its legacy will live on forever until the oceans of the earth evaporate, and this rock is engulfed in darkness. The Circle Game has become imprinted into the culture of this generation and will be for generations to come.